THE LAUNCHING EVENT OF INARA PROJECT: THE INTEGRATION OF AN AUTONOMOUS STREET LIGHTING SYSTEM IN THE RURAL AREA OF HALBA AKKAR

The launching event of INARA project: the Integration of an Autonomous street lighting system in the rural area of Halba Akkar 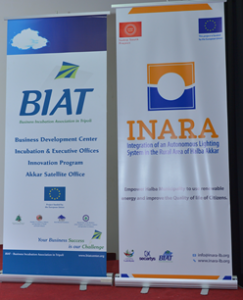 On Saturday November 13 2015, the municipality of Halba launches the project of INARA (the Integration of an Autonomous street lighting system in the rural area of Halba Akkar) at the municipality building.The projectis funded by the European Union in partnership with the Municipality of Halba, the Business Incubation Association in Tripoli (BIAT) and the Spanish Association for the Internationalisation of the Electronics, Information Technology and Telecommunication Companies (SECARTYS)

The Global objective of INARA project is to Empower Halba Municipality to use renewable energy and to light up Halba Streets. The project duration is 36 months during which up to 300 units of solar street lights will be installed to provide citizens with solar street lighting so as to increase working hours in the city and apprehend the value of alternative energy sources for the improvement of the local conditions.

During the launch, Halba’s Mayor Mr. Said el Halabi welcomed all present and said: “We meet today for the launch of INARA project, the first of its kind in Akkar, a gift much appreciated that will establish the concept of environmental, health and economical illumination. We consider that this project is a great title for Economy and progress; it is also a real and healthy partnership with international and local organizations and associations representatives that we thank them for their efforts in the preparation of the necessary research in partnership with the Municipality of Halba which enabled us from the early beginning to get funding for the project.”

He added that farmers, who make up the largest segment, are suffering from deprivation and lack of attention from the state and from international organizations which is seriously hindering its development and hoped that the European Union would focus more on developing and supporting this sector. 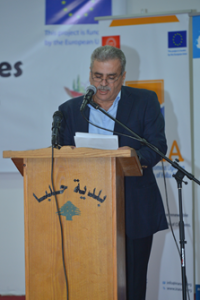 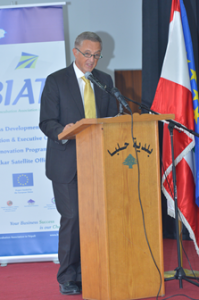 EU representative of the European Union mission to Lebanon Mr. Mori called then for a minute of silence on the souls of martyrs who were killed in Beirut and Paris after terrorist bombings then said: “Thank you for inviting me here today at the launching of the project. The energy sector is one of the key priorities for the EU in supporting sustainable development in Lebanon. We are very pleased to be working together with all the partners because together we share the same conviction that an efficient energy sector is of outmost importance for local and regional development. As Last year, the European Union Heads of State and Government made firm commitments towards an EU framework on Climate and Energy for 2030 and these commitments are reflected also in the EU-Lebanon Action Plan, where the promotion of renewable and low-carbon energy use and energy efficiency is a priority. Thanks to the EU’s financial support, more than 80 Lebanese SMEs and civil society organisations have initiated energy saving actions. Aware of the importance of the work of local authorities, the EU currently cooperates with 585 municipalities all over Lebanon, where it is actively supporting them by strengthening their capacities as service providers.” Mr. Mori concluded hoping that INARA-project would empower the Municipality of Halba and enable it to become a pioneering municipality that could inspire others to be actors of change towards a cleaner and greener Lebanon. 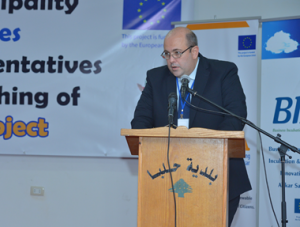 BIAT director Mr. Fawaz Hamdi then welcomed everyone and stated that: “Halba’s municipality today is offering all that is needed for the success of this project and is determined to move forward towards development and growth for all of Akkar. The good-neighbourly policies and partnership programs across the Mediterranean pursued by the EU aimed at promoting sustainable cooperation and operations at the Mediterranean basin level through dealing with common challenges and activating the potential and resources of these basin countries through financing cooperation in economic, social, environmental and cultural development projects.”

Mr. Hamdi concluded his speech with a promise that BIAT, which was founded and established by the European Union in 2006 as one of its projects, would always be supportive of Halba’s Mayor, to remain a leader in the support of public and private institutions in the North, a pioneer in the adoption of constructive ideas and strategies for the benefit of the nation, society and individuals.

Dr. Joud Moraabi, representing the President of the Chamber of Commerce Mr. Toufic Dabboussi, expressed in his speech, that this developmental vital and important step was the result of an extended cooperation throughout the years between the CCIAT and the Municipality of Halba first initiated with the adoption of the Chamber’s first branch in city hall in 2010  and since then BIAT, by virtue of its relations with  the EU, played a key role in supporting SMEs following the Chamber’s directives and was oriented in a continuing role that falls within the context of cooperation with the Municipality of Halba. He continued: “We see in INARA a hope to the public and a service for the people of Akkar to build an advanced relationship with their environment by using renewable energy and summarizing common aspirations in transferring developmental ideas into practice. 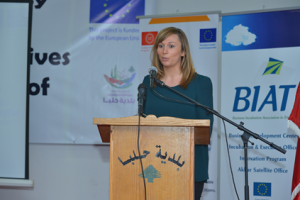 A presentation from Mrs. Jessica Kamps, representative of SECARTYS, explored their technical role in the implementation of the project; followed by a word of the project Coordinator of Halba Municipality Mr. Mohammad Shamsine presenting the main objectives and activities of INARA. Finally, Mr. Wael Zmerly, INARA’s project manager on behalf of BIAT explained in a short presentation the importance and advantages of solar energy and lighting in developing local communities.

The attendees of the event varied from representatives of ministries, neighbouring municipalities, Banks directors, schools and universities directors and teachers, clerics from various religions, NGOs and civil society representatives, media and private companies representing all the community of Akkar. 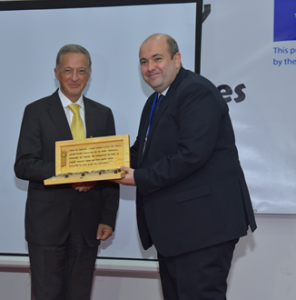